PM2.5 particles are so small they can lodge in the lungs and even pass into the bloodstream. There’s evidence they can damage blood vessels and other organs. Particulate pollution affects us all, but older people are more likely to suffer lung disease or have weakened lungs from ageing. There are no safe limits for PM2.5s, but the World Health Organization (WHO) recommends that concentrations should not exceed 10 micrograms per cubic metre. The BLF and Asthma UK report used data on PM2.5s collected in 2019. They found air pollution blackspots across the country that affected care homes.

It finds that older people and those with lung disease who are most vulnerable to the effects of pollution are often the most exposed. The new document is from the British Lung Foundation (BLF) and Asthma UK. It comes as MPs also demand the government sets tougher targets for air pollution. Improving air quality needs to be “at the core” of the UK’s post-pandemic rebuild, say members of a House of Commons committee that focuses on environmental issues. This consists of tiny particles known as PM2.5s which have a diameter of less than 2.5 micrometres across – that is one-four-hundredth of a millimetre or about 3% of the diameter of a human hair.

In 36 local authorities, every single care home is located in areas with PM2.5 levels above the limits recommended by the WHO. These include Epping Forrest, Luton, Thurrock, Reading, Slough, Spelthorne, Broxbourne, Dartford and Watford.

Air pollution is a major health issue in the UK, says Dr Nick Hopkinson, the medical director of the BLF. He estimates that between 30,000 and 40,000 premature deaths each year are caused by exposure to toxic air. Air pollution also increases the chances of a person developing lung cancer and cardiovascular disease and may be associated with cognitive decline, including dementia.

“We know that older people are more likely to be exposed to particulates and we know that air quality is worse where poor people live”, Dr Hopkinson. Reports BBC News. It also found that 3,000 hospitals and GP practices are in areas where particulate pollution exceeds WHO recommended levels. The current legal limit for PM2.5 in the UK is twice the WHO recommendation, at 20 micrograms per cubic metre. The BLF and Asthma UK are demanding the government reduce that to the 10 micrograms per cubic metres limit recommended by the WHO.

The advice has been echoed by the Commons environment, food and rural affairs (Efra) select committee. The charities behind the report are also calling for the government to appoint a minister with specific responsibility for improving air quality in the UK and to publish a national health protection plan to safeguard those most at risk from toxic air.

Responding to the report, Environment Minister Rebecca Pow said: “Air pollution has reduced significantly since 2010 with emissions of fine particulate matter falling by 9% and emissions of nitrogen oxides are at their lowest level since records began. However, we know there is more to do. “Our landmark Environment Bill will set at least two ambitious legally-binding air quality targets, with a primary focus on reducing exposure to particulate matter pollution. As part of this, we will consider the World Health Organization’s guidelines for PM2.5. “PHE (Public Health England) also continues to support health professionals improve our understanding of links between air pollution and health, including working with the National Institute for Care Excellence to develop guidelines and standards to better protect vulnerable people from air pollution.”

Alastair Lewis, a professor of atmospheric chemistry at the University of York, welcomed the report’s focus on the impact of air pollution on vulnerable communities. “The largest inequalities arise based on issues like health and deprivation and deprived communities typically have the worst air quality,” he says. However, he cautions that the figures for particulate pollution in the report are based on atmospheric models, rather than measurements made on the ground. He also points out that much of the PM2.5 in the atmosphere is often formed in the atmosphere by chemical reactions of other gases. These gases move between regions and even between countries so there may not be a local solution to the problem. 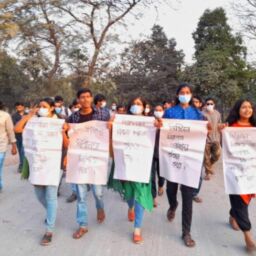