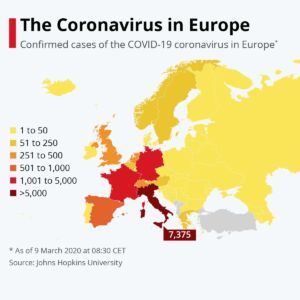 Countries across the globe went on heightened virus alert on Friday, sealing borders and cancelling top-flight cultural and sporting events in a frenzied bid to slow the ballooning pandemic. Financial markets endured a rollercoaster ride after a week of spectacular losses triggered by fears the outbreak will lead to a worldwide economic recession.

The death toll jumped over 5,000 on Friday as the total number of cases topped 135,000, according to an AFP tally based on official sources.

World Health Organization chief Tedros Adhanom Ghebreyesus declared that Europe was now the epicentre of COVID-19, describing it as a “tragic milestone”.

Spain, Italy and Iran — which have emerged as virus hotspots outside China — all clocked a dramatic rise in cases and fatalities in the past 24 hours, while infections were reported in Kenya and Ethiopia, the first in east Africa.

The virus has also torn up the sporting and cultural calendar, with top-flight events from Broadway to English Premier League football scrapped.

And the outbreak reached new heights with a slew of public figures from Hollywood actors to politicians and even the Canadian first lady falling ill with the infection.

COVID-19, which first emerged in China in December, has spread relentlessly around the world even as cases in Asia have levelled out in recent days.

South Korea — once grappling with the largest outbreak outside China — saw newly recovered patients exceed fresh infections for the first time and the lowest number of new cases for three weeks.

And China this week claimed “the peak” of the pandemic had passed its shores although it still has the biggest overall number of deaths and infections.

Governments across Europe have imposed a cascade of tough restrictions, while Brussels unveiled a raft of measures to protect the EU economy.

Spain declared a state of alert after its infections raced past 3,000, Switzerland and Germany announced school closures, and Ukraine said it would seal its borders to foreigners as it confirmed its first death.

France — the world’s most visited country — has also ordered schools and universities closed until further notice and announced it was banning gatherings of more 100 people.

President Emmanuel Macron said it was “the worst health crisis in France in a century”. The measures came after US President Donald Trump this week banned all travellers from mainland Europe for 30 days, prompting swift rebuke from the EU.

On the markets, Asian stocks tumbled in volatile business following the worst day on Wall Street since the crash of 1987 as traders scrambled to sell, wiping trillions off market valuations.

But European and US stocks and oil prices recovered on what analysts said were hopes of a US stimulus package.