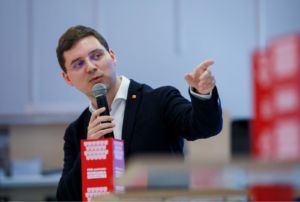 Following the first hesitant reactions at European level to the new coronavirus crisis, the European Union and the Member States have already launched a series of measures aimed at reducing the effects of the crisis, both medical, economic, social and of trist in the democratic institutions. After the national initiatives have failed, everyone has understood that the solutions can only be common, and Romania must use these opportunities.

The first measures were announced last week. Italy has received emergency financial and logistical assistance from the EU. Also at European level, the blockade imposed by certain states, such as Germany, to the export of medicines and medical equipment to other EU member countries has stopped. Last, but not least, solutions were thought to open borders’ access restricted by certain states, a measure that would have risked affecting the supply chain of necessary goods to the population and the economy. But the situation already implies a coherent long-term approach.

The European Union has already promised from the existing financial resources the allocation of 37 billion euros to save the European continent affected by the new coronavirus. The first 8 billion euros is already available from existing funds, while the remaining 29 billion euros is to come from structural and investment funds. The money is allocated to medical equipment, ventilators, masks suply, hospitals and to support SMEs and the social schemes designed to protect jobs.

Moreover, the European Union allows the Member States to transfer from the spent European funds to the new priorities and has relaxed its policy regarding state aid. In parallel, Europe has developed new funding solutions for research and for SMEs in the context of the new coronavirus outbreak and has taken steps to support access to medicines and medical equipment for the Member States. All these aspects represent opportunities that Romania must take advantage of. Our country would receive a first aid of 491 million euros, and the total amount may exceed 3 billion euros if Romania can prepare projects in this regard. It remains to be seen whether the current Liberal Government will know how to use these funds in the context where no one in the executive communicates about European issues.

Meanwhile, unprecedented measures are being announced all over the world to save the economy. The United States has pledged 1 trillion dollars for companies and the population, of which 250 billion checks for citizens, Germany over 500 billion euros in loans for affected companies, and France about 300 billion euros especially for supporting employees. Similar measures have been taken by Italy, Spain, Great Britain, Sweden, Denmark, Norway or Portugal.

The countries of the region are also mobilizing. Greece allocates 2 billion euros to firms and delays tax liabilities, Poland offers rebates to refinance loans to companies, while the Czech Republic cuts key interest rates by 0.5 percentage points to provide liquidity to banks. The only affected country that seems to ignore the situation is Romania which has so far only launched general ideas regarding the measures to be implemented. Most likely, our country needs additional investments of almost 40 billion RON, experts say, as well as economic recovery measures after most economic operators have signaled the risks and the possibility of making redundancies following the crisis generated by the new coronavirus.

All these things will pressure even more the budget deficit, which has already exploded as a result of the financial gifts made by the PNL Government to some of their close business allies. It is thus important for Romania to quickly request an exception from the stability pact. The reality is that many of the negative effects can be blocked or at least mitigated by coherent measures available at European level or by taking measures that are proven to be effective in other European states. Western leaders were surprised by the size of the crisis, but unlike Romania, they have the capacity and the means to intervene. At the moment, the decision-makers in Romania do not seem to demonstrate this or that they are even able to make use of the provided European opportunities. I trust Romanian and European citizens will find the solutions to face the current challenges.

Member of the European Parliament

Covid-19 recovery plan for the European Union On April 17,…

Air pollution increases mortality for the patient with COVID-19

Air pollution increases mortality for the patient with COVID-19 Deterioration…